Was Sarah Palin a panic pick?

According to the ABC, McCain wanted Lieberman but was told it would be a disaster, alienating his base. He wasn't happy with Romney (surprise!), Pawlenty (would you buy a used bridge from this man?) or Ridge (amber alert) so wan't something different.

So what does this say about McCain? In a time of political crisis, John McCain panicked, shot from the hip, and made what will likely be a terrible error in judgment. And he is supposed to be ready in a crisis to lead the nation?

It’s such a transparently political decision, a double-X Dan Quayle.

Posted by David B at 9:41 pm No comments: Links to this post

Essential Information For Visitors To Australia

Apparently, this is information given to questions on an Australian Tourism website.

Q: Can you give me some information about hippo racing in Australia? (USA)

A: A-fri-ca is the big triangle shaped continent south of Europe. Aus-tra-lia is that big island in the middle of the Pacific which does
not.. oh forget it. ..... Sure, the hippo racing is every Tuesday night in Kings Cross. Come naked.

Posted by David B at 9:16 pm No comments: Links to this post

This site has been receiving a lot of attention today - I've seen several links to it.
Posted by David B at 4:15 pm No comments: Links to this post

The campaign shows its lack of attention to detail again.

Posted by David B at 4:09 pm No comments: Links to this post

Norwich v Blackpool
Originally uploaded by oley moley
Norwich City maintaining their record of conceding a penalty in every match. So far, three games played and three penalties conceded (and scored). Let's hope for better luck today against Birmingham.
Posted by David B at 2:07 pm No comments:

It Really Isn't The Republicans' Year

After the perfect weather than Obama enjoyed for his historic speech on Thursday, a balmy 70 degrees evening, the republicans and their convention are facing the prospect of a major hurricane slamming into the Gulf Coast, and possibly New Orleans again, early next week. It would truly be ironic it the hurricane hit land just as W was about to speak.

From watching the news this morning it looks as if NO is much better prepared this time. Although the population is much smaller now, fleets of buses are already in place, the National Guard has been deployed and trains are ready to move the old and sick. Let's hope there's no repeat of three years ago. To keep up to date, I'd recommend Brendon Loy's Weather Nerd Blog.

Meanwhile, who's going to be watching a convention with a hurricane on the way?
Posted by David B at 1:54 pm No comments: Links to this post

John McCain surely pulled a big surprise by this pick. But will it succeed?

First of all, he has the throw out his arguement about Obama's lack of experience. With Palin just 'a heartbeat away', it puts the experience theme that McCain has been pushing right on the back burner. How can he consider it an issue when he has picked a complete outsider with virtually no experience for VP. To me it looks like an outright pander to women voters and the initial comments I've read on blog threads don't seem to support that.

For some background information on Palin, this blog (via Andrew Sullivan) gives some excellent background, especially the 'Trooper-gate' affair which TPM has been following for the past few months.

A couple of obvious questions are raised - would she have been picked, with her experience and background, if she were not a woman to which the answer is blatantly 'No'. Will it work? I think this depends on how she handles herself over the next couple of months. If she comes across as knowledgeable and statesmanlike then it may be a brilliant pick. However, from whjat I have read, it doesn't look likely.
Posted by David B at 1:40 pm No comments: Links to this post red arrow over cromer peir
Originally uploaded by catz5555
It was Cromer Carnival Week last week. The highlight of carnival Day is always the Red Arrows display which you can watch from the cliff tops. I understand they performed later than usual, about 5pm, which would have been just before the parade started.
Posted by David B at 5:25 pm No comments:

This Is An Aquarium 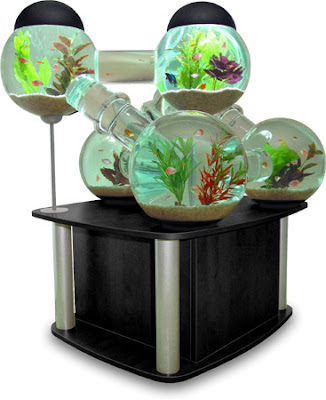 I've got an aquarium at home but it's nothing like this.
Posted by David B at 5:16 pm No comments: Links to this post

With the advancement of scientific knowledge in mind...

Posted by David B at 2:47 pm No comments: Links to this post Château Bouillon HDR
Originally uploaded by rbleib
The chateau at Bouillon, in the Ardennes in Belgium.

We had a wonderful holiday many years ago near here staying in a gite in France just over the border. The chateau sits on the neck of a loop in the River Semois with the town down below.
Posted by David B at 2:09 pm No comments:

I've been reading the FiveThirtyEight.com website for a while and especially keeping an eye on the predicted electoral votes that Obama would receive in November based on the evidence available. I decided last month that I'd keep a graph of the stats as they would change regularly but I could never remember from what. I wish I'd started this earlier - it may have been done somewhere else already.

The site is my go-to place for an overview of what's happening in the race. Here's a link to the graph...
Posted by David B at 1:51 pm No comments: Links to this post

But it must be expensive in balls.

FOOT 2008 (REMI GAILLARD)
Uploaded by nqtv
Posted by David B at 6:24 pm No comments: Links to this post

Norwich City's start to the season could hardly have been worse in terms on results - an opening day defeat at Coventry, a defeat to League One's MK Dons in the first round of the League Cup, followed by a draw at home to Blackpool last Saturday.

But reading between the lines, which is about all I can do from 12,000 miles away, the picture doesn't look quite so bad. The new signings seem to have settled in well, the two league games should and could have been wins. We seem to have dominated the possession and had great chances to score in both but not taken them only to concede a penalty in each game.

Yes, we need a new striker, I've still got hopes that we might sign Sheola Ameobi from Newcastle, but while the chances are being created, we're bound to start converting them. So, I'm not too disappointed and think that midtable or better is on the cards for this season. We can start with a win at Cardiff tomorrow though we'll have to make do without a Ched Evans wonder goal this year.
Posted by David B at 5:59 pm No comments: Links to this post

How is the US election even close? I'm trying not to be too disappointed with the news that John McCain has caught up with Obama in the polls. I have a lot of faith in the Obama organisation who planned the primary competition perfectly.

I've read that a lot of Obama's effort is currently going into the 'ground game', setting up and staffing dozens of offices in key states. The effect of these won't really be seen until nearer to November. I think he's been a bit slow in fighting the effects of the McCain-Rove campaign but I don't believe that that is going to last. The election in November is what counts, not the state of the polls now.

With McCain's lack of policies and his need to please two completely different audiences, his base and independent voters, I can't believe the wheels aren't going to come off soon.

After eight years of one of the worst presidents in US history, I can't believe that four more years is a possibility. So I'll predict that Obama will win in November, I think quite comfortably. So it doesn't matter what the polls are saying now.....does it?
Posted by David B at 5:43 pm No comments: Links to this post

Learn more about Peak Oil at Energy and Capital.